Danger from the North 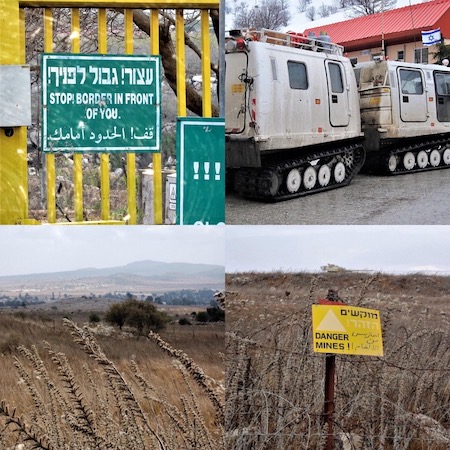 The Port of Beirut blew up several weeks ago. Not only did a warehouse containing 2750 tons of ammonia nitrate explode, but the country itself is in chaos. After twenty years under the control of corrupt warring factions, this is the result.

Beirut used to be called “Paris of the East”; now it is called “Chernobyl.”

Lebanon happens to be on the northern border of Israel. My wife and I have traveled extensively on the northern border. From east to west, it is beautiful and dangerous. We have stood at the borders of Syria and Lebanon; we have encountered wild boars in Tel Dan; we have seen flowering fields filled with unexploded landmines, the orchards of Metulla and the magnificent snow-covered Har Hermon, the highest point in Israel.

“Lebanon” is a Biblical word. The Bais Hamikdosh is called “Lebanon,” because the root of the word is “lavan,” which means “white.”

“Rabbi Yitzchak ben Tavlai said: Why is [the Holy Temple] called ‘Lebanon?’ Because it whitens the sins of Israel.”

“[The Temple Mount] is joined by the rest of the land, which rises from south to north as an extension of the slopes of Lebanon. Mount Moriah … the southernmost of the mounts of Lebanon, is … regarded as the root of the Lebanon range …. Our sages therefore interpret that the whiteness of snow, to which the name ‘Lebanon’ alludes, symbolizes the moral meaning of white as the color of purity and refinement. In this conception, the entire Lebanon range is named after the ‘place of purification’ that was founded on its southern extension.”

The Bais Hamikdosh itself can be dangerous. If you are not in a state of purity, you cannot enter. If a stray thought entered the head of the Kohain Gadol on Yom Kippur when he stood in the Kodesh Kadoshim, they had to pull him out with a rope.

Every border of Israel is dangerous, but the North is singled out by the Prophet: “Then the word of Hashem was upon me, saying, ‘What do you see, Yirmiyahu?’ …. And I said, ‘I see a boiling pot and its bubbling is from the northern side.’ And Hashem said to me, ’From the north shall the evil loose itself upon all the inhabitants of the Land….’”

This week’s Parsha begins with the words, “Shoftim v’shotrim titen l’cha …. You shall appoint judges and officers in all your cities….” The Torah warns that it is not sufficient to have laws; the government must enforce the laws. In the words of the Mishna, “Rabbi Chanina the Deputy High Priest said, ‘Pray for the welfare of the government, for without the fear of it, man would swallow his fellow alive.’"

Today, in the United States, the very institution of “shoftim v’shotrim,” meaning those who are appointed to enforce the law, is under attack. Lawlessness is not only increasing but lawlessness itself is being advocated, in some cases by those officials elected for the very purpose of upholding the law. Those who are motivated by personal desire for power are attempting to destroy the law for their own purposes. If they succeed, G-d forbid, they will end up by destroying the world in which they live. We see the results in Lebanon, a beautiful and once-cultured country which is now on the verge of anarchy.

Anarchy is more dangerous to us than to any other people. We are the ones who introduced the concept of law into the world. Even non-Jews are subject to the positive mitzvah of setting up courts of law. Am Yisroel bequeathed to the world the concept of laws for the purpose of ensuring the peaceful coexistence of all of Hashem’s children.

As we count down toward Rosh Hashanah and Yom Kippur, it is incumbent upon us to act for the peace of the world by making peace among ourselves. We cannot achieve forgiveness on Yom Kippur until we appease our brethren whom we have distanced by our actions. The world is going through difficult nisyonos right now and Hashem is clearly waiting for our teshuva.

The brachas we say over the Torah every day include the ten precepts “whose fruits a person enjoys in This World but whose principal remains intact for him in the World to Come.” The last precept before “Talmud Torah keneged kulam,” is “bringing peace between man and his fellow.” There is no Torah without peace.

The last bracha in Shemoneh Esreh ends with the words, “Blessed are You, Hashem, Who blesses His people Israel with peace.” Peace is the result of all our efforts to better ourselves; it lays the foundation for the Final Redemption.

Why is it so difficult to achieve? Look at our terrible Golus, caused by sinas chinom, unwarranted hatred. I believe the Satan hates peace because he knows that, when we achieve it, his job will be over!

When are we going to wake up? Does it take an explosion? The time for healing is now. We received the Torah at Har Sinai only because we were “K’ish echad b’lev echad … like one man with one heart.”