The Shtender in the Parking Lot 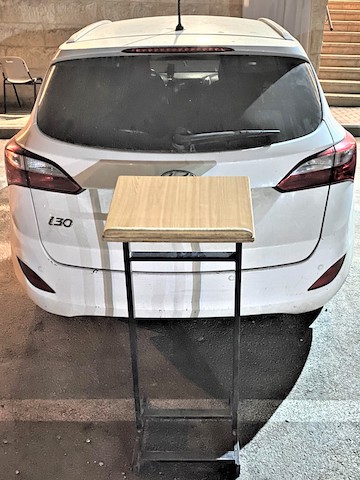 As Rosh Hashanah draws close, what should occupy our mind?

Let’s try to learn from Moshe Rabbeinu. Here is how our Parsha begins: “You are standing today, all of you, before Hashem, your G-d ….” (Dvarim 29:9)

All of us! Together! Standing before Hashem!

The implications are awesome. Sometimes we do not realize where we are standing.

“Yaakov awoke from his sleep, and said, ‘Surely, Hashem is in this place and I did not know!’ And he became frightened …” (Beraishis 28:16)

I want to tell you a story.

In this age of Corona, my wife and I are very careful. I do not daven inside. Most evenings I daven outdoors at a minyan in a large parking lot. The one who is leading the prayers (often a teenager) places the shtender behind a parked car. People are scattered around the parking lot at a healthy distance. He davens very nicely. After he finishes, we leave and the parking lot is once again empty.

Well, it’s right there where he left it, behind the parked car.

My friends, every evening after maariv, I imagine the scenario: the next morning, a man comes out of his apartment, starts his car and backs up. CRASH! He hears a loud noise behind him as his car runs over a large metallic object.

He is running over a shtender!

Why did the young man leave the shtender behind the car?

“You are standing today, all of you, before Hashem, your G-d ….”

Are we thinking, my friends?

We have to think. We have to consider the effect of every word and action, even every inaction! Our Exile was caused by “sinas chinom,” unwarranted hatred between Jew and Jew, but sinas chinom begins with thoughtlessness. We have to calculate the consequences. Hashem gave us brains and a heart.

“You are standing today, all of you, before Hashem, your G-d ….”

How can we escape from this agonizing Exile unless we care actively and intensely for each other? “Kol Yisroel araivim ze ba’ze … every Jew is responsible one for the other!”

Unless we act like one family, how can Hashem save us?

In fact, this week’s Parsha echoes this exact message! Rashi tells us that we all “became guarantors for each other” when we entered the Land of Israel and accepted upon ourselves the oath at Mount Gerizim and Mount Eival. (Rashi on Devarim 29:28)

We are not permitted to go to sleep at night until we forgive every Yid. “Master of the Universe, I hereby forgive anyone who angered or antagonized me or who sinned against me ….” Our neshoma is not admitted to the Upper Worlds until we have removed the barriers between us.

Similarly, we are not permitted to pray until we forgive every Yid. There is a tradition based on the Arizal (Eitz Chaim שער עולם העשיה Chapter 1) that every person should take upon himself the obligation of “ve-ahavta lerei'acha kamocha … to love every Jew like himself” before davening. We cannot approach Hashem until we have removed the barriers.

Is this not like the halacha that one cannot be forgiven on Yom Kippur for sins against his fellow unless he first asks and receives “mechila,” forgiveness from the person against whom he sinned?

We have to care for each other. This is not simply a nice thing; this is survival. At Har Sinai, we received the Torah only because we were “k’ish echad b’lev echad … like one man with heart.” (Rashi on Shemos 19:2) What could be more important, when imploring Hashem for a good year, than becoming One Nation again?

“If you would but listen to Me,” Hashem says! “But My people did not heed My voice …. If only My people would heed Me, if Israel would walk in My ways, in an instant I would subdue their foes and turn My hand against their tormentors….” (Psalm 81)

It is possible to establish love and unity among us, especially during this Month of Elul. But it takes work and intention. We have to think about every action, asking Hashem at every moment whether we are doing the right thing. “Ata chonain l’adam daas”…. Hashem “[graciously endows] man with wisdom!”

May we merit to have a magnificent year filled with elevation in Torah, peace, health, prosperity, nachas, simcha, unity and all the blessings we so fervently desire!