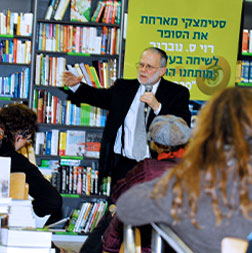 Dear Friends,
This year the first day of Rosh Hashana is on Shabbos; we do not blow the shofar.

Our Rabbis issue a statement about this. “And Rabbi Yitzchak said: Any year in which they do not sound a tekiah [blow the shofar on Rosh Hashanah] they will sound a teruah [out of sorrow] at its end.” (Rosh Hashanah 16b)

The shofar is our advocate. When the advocate is absent, we are, G-d forbid, vulnerable. After the past twelve months, we already feel vulnerable. So this is frightening.

Granted, we cannot help it. Halacha prohibits us from blowing the shofarwhen Rosh Hashanah falls on Shabbos, so we are simply following halacha. But that is scant consolation. The fact is that, for whatever reason, we lack our advocate.

My wife and I were recently in a government office on a relatively routine matter, but the official was not being reasonable nor cooperative. I began to get upset, as a result of which I was not able to state our case fluently. Fortunately, however, we had brought our attorney along, and he took over. He calmly made several suggestions which were accepted by the official. We needed an advocate!

“Rabbi Abahu said: Why do we blow with a shofar of a ram? The Holy One, Blessed is He, said: Blow before Me using a shofar of a ram so that I will remember for your sake the binding of Yitzchak, the son of Abraham, and I will consider it for you as if you had bound yourselves before Me.” (ibid 16a)

I would like to present to you the words of Aruch La Ner, which my heiligechavrusa, Rabbi Shaul Geller, kindly brought to my attention. I believe these words will give us perspective, and strengthen us as we enter the Days of Judgment.

It seems that the years on which the first day of Rosh Hashanah falls onShabbos are usually either very good or very bad. Why is this so? The Aruch La Ner gives a moshul[1] to explain.

A king’s servant committed a misdeed and was sentenced to death. This man had a loyal wife who decided that she would be an advocate for him, so she went before the king to plead on her husband’s behalf. She had something in her favor; she was one of the king’s highly-regarded secretaries. Her appeal was successful, and her husband was saved from death.

Shortly afterwards, another servant incurred the king’s wrath and was also sentenced to death. Having seen the recent success of the wife of the first official, this man’s wife also went before the king to plead for her husband. She also, in fact, was one of the king’s valued secretaries, but there was a difference. When she appeared before the king, he noticed bruise marks on her face. Upon questioning, he learned that her husband had mistreated her. This husband was not saved from death.

What do we learn from this moshul?

We do not blow the shofar on Shabbos because of the high honor in which we hold Shabbos and the strict laws which govern our behavior on that holy day. Shabbos is the “bride” of Am Yisroel, as we say every week in Lecha Dodi and as our Sages explain in the Midrash. (Beraishis Rabbah 11:8)

When Rosh Hashanah falls on Shabbos, Shabbos itself becomes our advocate before the King! If we honor Shabbos, the King will free us and seal us in His book for life! But if we mistreat Shabbos – G-d forbid! -- then the King is not going to free us!

If we honor Shabbos and treat her as our beloved bride, this will be a year of blessing!

My humble suggestion, my friends, is as follows. The Satan is smart and tricky, way ahead of us. But there is one thing the Satan cannot deal with, and that is our sincere emotion, the tears and outpouring of passionate pleading that comes from the heart of a Yid. There is nothing the Satancan do to stand in the way of a torrent of tears that emanate from deep in our heart.

The shofar sounds like our remorseful moaning and causes us to cry out to Hashem, as in Biblical Egypt, when “the Children of Israel groaned because of the work and they cried out. Their outcry … went up to G-d. G-d heard their moaning and G-d remembered His covenant.…” (Shemos 2:23ff)

Sometimes it is difficult to pray. Our very distance from Hashem makes it difficult to re-establish the connection. But there is a way.

“Even though the gates of prayer have been locked, the gate of tears has not been locked, for it is stated [in Psalm 39:13], ‘Hear my prayer Hashem! Give ear to my outcry! To my tears be not silent.’” (Berachos 32b)

Rabbi Eliahu Dessler says that prayer which emanates from deep within the heart, to the point that the supplicant is moved to tears, can open the gate. (Michtav MeEliahu IV, page 262, quoted in the Artscroll commentary to the above Gemara)

Tears confuse the Satan because Hashem knows who is sincere about coming back to Him in teshuva. He goes right past the Satan! “Hakadosh Boruch Hu liba boie … Hashem wants the heart.” (Rashi on Sanhedrin 106b)

That is what it is all about! Tears penetrate the Heavenly Gates.

May we greet Moshiach ben Dovid this year!