The Dimension of Impurity 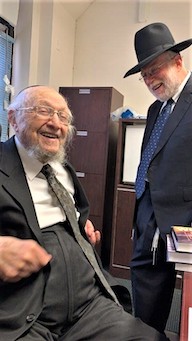 I was in the middle of writing this week’s article when I learned that the U. S. election has apparently been decided. I would like to comment on what I believe is the significance of this event. I understand that the validity of the results is under challenge, but those challenges would not nullify what I am about to say.

The end of this week’s Parsha describes how Avraham Avinu remarries at the end of his life and becomes the father of additional children. He gives these children “gifts” and then sends them “away from Yitzchak, his son … ked-mah el eretz kedem … eastward to the land of the east.” (Beraishis 25:6)

What is “eastward … to the land of the east?”

And why does Avraham Avinu want to separate these children from Yitzchak?

“Chazal tell us that there is one place in the world outside Eretz Yisroel where avodah zarah (idol worship) was exceedingly strong. That is, somewhere in the Far East. Harav Yitzchok Hutner zt”l used to explain that the reason we see so much avoda zara emanating from the Far East is sourced in the words of the possuk [quoted above, regarding the sons of Avraham Avinu who were sent to the East].

“Rashi … writes that the ‘gifts’ which Avraham Avinu gave to the children of his concubines were the ‘Shaim Tumah … Names of Impurity.’ In other words, Avraham gave them the pseudo-spiritual practices rooted in the ‘sitra achra’ (dimension of impurity … evil inclination). This ‘storehouse’ of impure wisdom was sent to the Far East, as suggested by the repetition of the words ‘kedmah … kedem.’ Apparently, Avraham tried to get rid of all this impurity by sending it far out, but he was not completely successful.” (Rabbi Belsky on Alternative Medicine)

What is the “dimension of impurity” to which Rabbi Belsky refers?

I am not going to attempt to define “impurity” because the answer is so deep. But we know that impurity was introduced into mankind when Adam and Chava ate the prohibited fruit in the Garden of Eden. At that moment death entered the world. Along with death came every form of suffering. Contact with the dead is the primary source of impurity. The forces of impurity that were unleashed 5781 years ago in Gan Eden have been in ascendancy from that moment onward.

As we learned from Rabbi Belsky, the seat of impurity is in the Far East. From the first day of the secular year 2020, the plague of Corona, emanating from the Far East, has spread across the world. It is more than a physical plague; it is also a spiritual plague which has terrible destructive potential, G-d forbid.

I do not think it is an accident that the petira of Hagaon Ha Rav Dovid Feinstein zt”l occurred shortly before election results were announced in the United States. So many gadolim have left us in recent decades that we have little protection against the onslaught of this tumah. Am Yisroel, the Children of Israel, who have brought Torah into the world, are the only shield standing in the way of the domination of tumah over the entire world. The Bais Hamikdosh, the Holy Temple, for which we are so desperately waiting, was the antidote to tumah. As the Prophet says, “Ki mi Tzion taitzai Torah, ud’var Hashem mi Yerushalayim … From Tzion the Torah will come forth and the Word of Hashem from Yerushalayim.” (Yeshiah 2:3)

We have no Temple today, and tumah is strengthening itself. Those who are rooted in impurity have lost their sense of embarrassment, and now the tsunami of impurity is threatening to engulf the entire world.

In my book, Hold On: Surviving the Days Before Moshiach, I speak about certain practices reflecting moral deterioration which, our Rabbis tell us, caused the Great Flood to engulf the earth. Those practices are once again becoming prevalent throughout the world. I, for one, do not believe that Hashem will allow these impure practices -- which caused the destruction of the world 4125 years ago -- to continue. As we saw last week, in the case of Sodom, there is a limit to the extent to which Hashem will tolerate evil.

Hashem revealed to Avraham Avinu (in the Bris Bain ha Basarim, Beraishis 15:16) that his children would inherit the Holy Land only when the “iniquity of the Amorite [shall be] full.” Rashi comments that Hashem “does not exact punishment from a nation until its measure (of sin) is full.”

My friends, it appears that the measure of sin in the world is nearly full. Those who deny the Existence of the Master of the Universe are in ascendance. At some point Hashem will act and we must be prepared. “When the wicked bloom like grass and all the doers of iniquity blossom, it is to destroy them until eternity.” (Psalm 92) Right now, it is our job to “Hold On” to Hashem and His Torah with all our strength.

Let us hope the day will come soon when “idolatry will be removed from the earth and false gods will be cut off, to perfect the universe through the Al-Mighty’s sovereignty…. On that day Hashem will be One and His Name will be One!” (Aleinu)