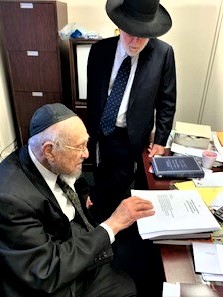 In the spring of 2019, my dear friend and colleague Reb Tsemach Glenn took me to the Lower East Side of Manhattan and introduced me to the Gaon ha Rav Dovid Feinstein zt”l. If you have read my book, From Central Park to Sinai: How I Found My Jewish Soul, you will know that I was raised on the Upper East Side, which was a different universe from the Lower East Side!

The Upper East Side was the province of assimilated Jews who distanced themselves as much as possible from their Torah-observant brethren and their roots in an effort to assimilate into American culture, which was all about materialism and the technological “paradise” which it was attempting to build.

These Jews looked down on their religious brethren in order to rationalize their own rebellion from the ways of our Fathers. The classic example of this is the New York Times, the newspaper founded by assimilated German Jews, which is infamous for its bias against observant Jews and the State of Israel.

Thank G-d, I never felt comfortable in this milieu, although I did not want to identify as a Jew. I tried one path after another until finally – at the age of 31 – I discovered that there is no true way of life in this world except the Torah way!

Thank you, Hashem, for rescuing me!

There is an old yeshiva on the Lower East Side called Mesivta Tiferes Yerushalayim, fondly known as “MTJ.” It is there that Rabbi Moshe Feinstein zt”l, the great leader of American Jewry, presided for decades, and it is there that his son, Rabbi Dovid Feinstein presided in his place until a few weeks ago, when he left this world. His father’s desk still sits in the Bais Midrash, untouched since his passing.

I had never been inside MTJ until Tsemach Glenn took me there. The sanctity of the place seeps out of the old woodwork. Here there is nothing but Torah and chessed, the pervasive feeling of spiritual comfort that surrounds places which are bastions of Torah. It is like inhaling the ketores, the incense, in the Holy Temple; the blessing is in the air and it fills your soul.

Tsemach and I had come to try to obtain a haskama, a letter of rabbinical approbation, from Rabbi Feinstein for my forthcoming book, Hold On: Surviving the Days Before Moshiach. I had never met Rabbi Feinstein before that. He was a warm person with a huge smile, straight as an arrow. It seemed that He himself was awed by the Torah which surrounded him. He seemed to exemplify the words of our Morning Prayer, “What are we … What is our righteousness … What can we say before You, Hashem? … Are not … the wise as if devoid of wisdom?”

Do you know what awed me about Rabbi Feinstein?

He refused to give my book a haskama!

Think about it: he had nothing against the book, but, in his honesty, he said, “I don’t know you and I don’t know the book! How can I endorse something I don’t know?” Yes, he could have offered to read the book or skimmed it quickly, but he had no time to read it carefully, because the weight of the world was on his shoulders.

My friends, this is called “yashrus … straightness.” It is what we need in this world: honesty, humility. This also means honesty in self appraisal, willingness to see our own faults and virtues in an effort to live a pure life in front of Hashem.

Rabbi Dovid Feinstein was from the old generation, the generation that is leaving us quickly, like leaves dropping off the trees in the autumn wind. We are bereft, my friends, because there is no one to replace such exalted souls.

In this week’s Parsha, we meet Yaakov Avinu, the Father of the Twelve Tribes and the crown of the Patriarchs. Yaakov Avinu was destined to die in Mitzraim, Biblical Egypt, as the archetypal Golus (Exile) was about to begin. At the end of the Egyptian Exile, just before Moshe Rabbeinu led his people out, the world of our fathers was bleak and bitter. They were being tortured and there was no one left from the old generation to save them. The Twelve Tribes, the Fathers of Am Yisroel, were all gone. As the Torah tells us, “Yosef died, and all his brothers, and that entire generation ….” (Shemos 1:6)

My friends, the entire generation of the Great European Rabbis is leaving us. They are almost all gone, and we are bereft. We are alone and we are suffering.

What are we going to do? To whom will we turn?

My friends, we are close to the bottom. And they were also close to the bottom in Ancient Egypt. This is when our ancestors called out to Hashem. “Their outcry … went up to G-d. G-d heard their moaning and G-d remembered His covenant with Abraham, with Yitzchak and with Yaakov!” (ibid 2:24)

May He hear our cries and send our Righteous Redeemer soon in our days!