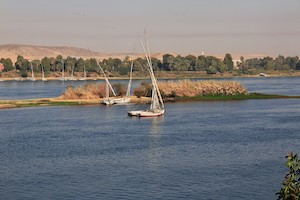 Anyone who has read my columns over the years will know that Vayigash is, for me, the most emotional Parsha in the Torah.

Imagine the brothers’ shock when they hear these words. Jaws drop. Eleven brothers are frozen in place. The mask falls; all see Yosef standing before them.

This is how Moshiach will come. Jaws will drop. “Moshiach was in front of us and we did not know it!”

Everything in this Parsha is so clearly relevant. This is the foundation of everything that has happened to us over the years. It is so clear that machlokes, antagonism between brothers, is the cause of all the tragedies that have befallen the Children of Israel. It was true then and it is true now. Yosef, in his greatness, caused the brothers to search their hearts; he was able to restore peace to the family.

“Only considerations of absolute necessity could have brought Yosef to follow a course of action that otherwise would appear to be senseless harassment. If Yosef had wanted to remain … nothing but a prince in the eyes of his father and brothers, if he had not cared to return to his family as a son and a brother, he would not have needed to resort to all these contrivances. However, Yosef, … felt that he would have to bring about two changes before he could make himself known to his brothers:  a) He should be able to change his own opinion of his brothers … and above all b) his brothers should change their opinion of him.... In short, at the moment when he would identify himself to them as their brother Yosef, the blindfold would drop from their eyes and it would be possible for both Yosef and his brothers to erase completely the past. Only thus could Yosef hope to be truly restored as a son to his father and as a brother to his father’s children.” (Rabbi Samson Rafael Hirsch on Beraishis 42:9ff, Feldheim Publishers)

I saw a contemporary commentary on the same subject, “It was very important to Rav Belsky that his children stay close to one another and care for one another. After their marriages [the children settled in cities around the world] … yet, to this day, all remain close and in frequent contact with one another.” (Rav Belsky, Artscroll/Mesorah)

Machlokes, fighting in the family, is the cause of all our troubles! We cannot receive the Torah unless we are united. At Mount Sinai, where we received the Torah, we were “k’ish echad b’lev echad …. Like one man with one heart.” (Rashi on Shemos 19:2)

Achdus … unity is the prerequisite for survival.

Have we eliminated anger, jealousy and hatred from our hearts? It is not simple. These emotions are extremely difficult to eliminate.

How often do innuendoes against others slip into our conversation?

How often do we harbor thoughts of jealousy?

How often do we think negatively about others?

How can Moshiach come when I am thinking negative thoughts about my brothers and sisters? Every night, we begin Krias Shema al ha Mitah with these words: “Ribono shel olam…. Master of the Universe, I hereby forgive anyone who angered me or antagonized me or who sinned against me ….”

We are not allowed to go to sleep unless we have said this. We also cannot begin to pray without accepting upon ourselves to remove barriers between us and every other Jew. (See Magen Avraham, Siman 46/ Pri Eitz Chaim)

Can you imagine the suffering of Yaakov Avinu when the brothers sold Yosef?

Can you imagine what we are doing to Our Father in Shomayim when we engage in sinas chinom … unwarranted hatred between Jew and Jew!

Is it so hard to understand why Moshiach is not here?

May we see the day when jaws will drop once again and we hear the words “Ani Hashem, your G-d … for a second time” (Mussaf Shabbos Kedusha) with the coming of Moshiach ben Dovid soon in our days!