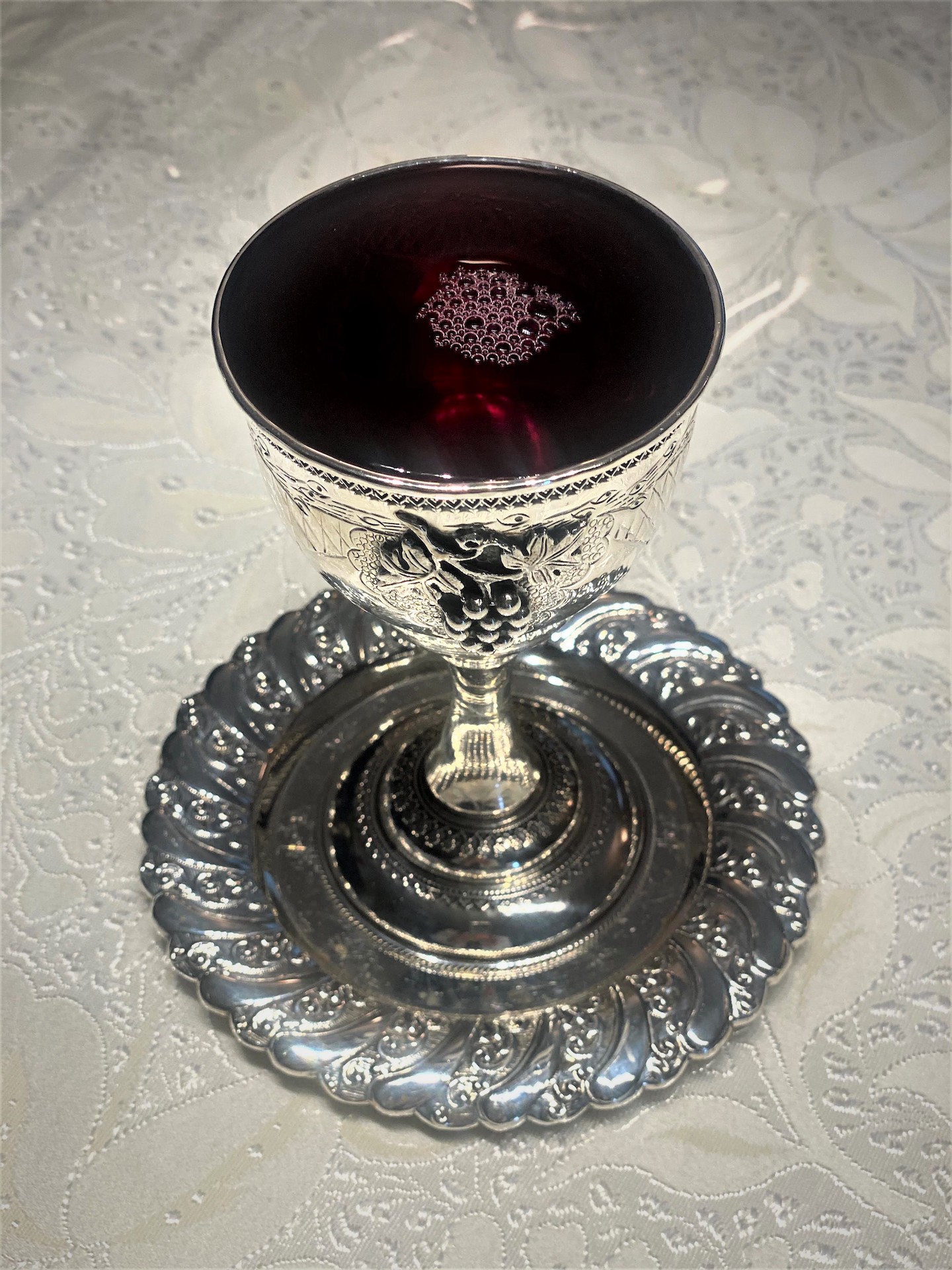 “Baruch Ata … Blessed are You, Hashem, Who creates the fruit of the vine.”

What is it about wine?

Why does Purim overflow with wine?

Why do we drink Four Cups on Pesach?

Why do we inaugurate Shabbos with wine?

Imagine: you had a stressful week. You feel pressed down by life. Then Shabbos arrives. You lift the cup of wine. You look at the deep, rich color. If you are fortunate enough to be drinking Israeli wine, you are looking at the produce of the Holy soil of Israel. And then you start the blessing.

Already you are in a different world!

Kiddush – by definition -- brings kedusha into the world!

How does it work? There is a secret in the fruit of the vine which elevates the soul. It seems to remind the soul that it exists!

This is what our entire life is about. We want to focus on the neshoma, the soul, but we have to find it first! When the wine enters us, the soul remembers its own existence!

Think of the tzouris Am Yisroel has suffered. Millennia of suffering at the hands of slaves, murderers, enemies. Yet, for thousands of years we have lifted our cup Friday night and suddenly the world is filled with light and hope! “Peace be upon you, ministering angels ….”

We drink the deep red wine and suddenly we are in a different world. “Shake off the dust! Arise! Don your splendid clothes, My people! Through the son of Yishai, from Bais Lechem! Draw near to my soul! Redeem it!” (Lecha Dodi)

On Pesach Night at the Seder, it is a nearly-universal custom to dip one’s finger in the Kos and remove a drop of wine for each of the Ten Plagues. “Dam, tzefardaya, kinim ….“ and so on. After you remove those drops, look in your Kos. Did the level of the wine drop? Do you see any difference in how much wine is in your cup from before you took out those drops? No, you cannot see any difference.

Each drop represents a powerful plague which decimated the most powerful nation on earth. But the cup is still full of wine!

My friends, I had the most amazing thought. I cannot remember if I read it somewhere, but I have not found the source, so maybe the thought came to me.

What happened in Mitzraim was perhaps the most important event in history aside from Creation itself. It led directly to the revelation of the Torah. Here was the superpower of the ancient world, whose iron grip held the Children of Israel prisoner in the cauldron of idolatry, impurity and decadence. This was like the cold hand of a dead man clutching our ancestors. Hashem liberated our ancestors from death so that we could become “the bride” of the Creator of the Universe.

What greater event was there than that? And this is what we celebrate every Pesach!

Yet there is a greater event, and that is the Geula Shelemah, the Final Redemption, which will occur at the end of history.

“Ben Zoma [asked] the Sages, will we mention the Exodus from Egypt in the Messianic Era?” He then answers his own question: “Has it not already been said: ‘Behold, days are coming – the word of Hashem – when people will no longer swear, ‘As Hashem lives, Who brought the Children of Israel up from the Land of Egypt,’ but rather, ‘As Hashem lives, Who brought … back the offspring of the House of Israel from the land of the North and from all the lands where in He had dispersed them!’

How much greater is the Geula Shelemah than Yetzias Mitzraim?

Can we imagine it? Yes, we can.

Just look at your wine glass at the Pesach Seder. Compare the Ten Drops you have removed to the wine which remains in your cup. That comparison is the degree of magnitude by which the Final Redemption will overshadow the Exodus from Mitzraim! The wine in your cup is like the ocean compared to a drop of water.

My friends, the Final Redemption will represent such an overthrow of current world culture that that culture -- the world of Esav/Edom -- has been trying to push it off for thousands of years. In its deepest consciousness it knows what is coming. The world of Esav/Edom cannot bear to contemplate the thought of its own downfall. That is why it is so desperately trying to enslave our People and push us down, to this very day.

When you hold the cup of wine in your hand this Pesach, think about the Final Redemption and the incomprehensible Greatness of the Al-Mighty, the invincible power which will topple every wall and bring down all the pompous emperors of the world. All will tremble before the King of Kings. And our Great Nation, His Chosen, His Firstborn, will b’ezras Hashem merit to see this day if we hold on to His Torah with all our strength!

“May the Temple be rebuilt, the City of Tzion replenished. There shall we sing a new song, [and] with joyous singing ascend. May the Merciful, the Sanctified be blessed and exalted over a full cup of wine worthy of Hashem’s blessing!” (Tzur Mishelo)

Tzur Mishelo: Song we sing at the Shabbos Table