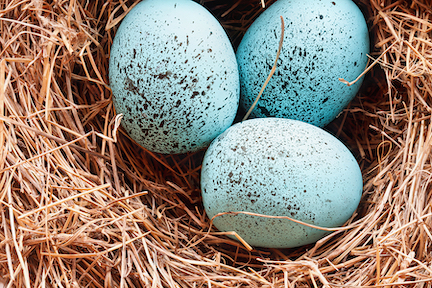 I have presented this moshul several times since having heard it years ago from Rabbi Naftali Jaeger Shlita”h, who told it over in the name of the Ishbitzer Rebbe. This is a such a classic that I feel moved to tell the story once again, and now is the time.

We are in the season of Sefiras ha Omer, the holy thread that binds Pesach to Shavuos. What is unique about this season?

The Ishbitzer speaks about the egg.

The egg is an integral part of Pesach. On the Seder plate, it represents the Korban Chagiga, the Festival Sacrifice brought in the Temple. In addition, we eat an egg during the Seder meal.

What is special about an egg?

My friends, there is nothing else like an egg. Most mammals are born once, but birds are born twice; it is a two-part process. First, the egg is laid, but the chick is still inside and must develop the strength to peck its way out. This is intense labor; some birds even develop an external “egg tooth” to crack the shell from the inside. When the shell cracks, the chick emerges. This is the second part of the birth process.

So it is with the Children of Israel!

We are also born twice: physically on Pesach and spiritually on Shavuos.

In Ancient Egypt we were born physically. When we left Egypt, we were still at the forty-ninth level of impurity, carrying a slave mentality, unprepared to receive the Torah. We then marched forty-nine days to Har Sinai, under the leadership of Moshe Rabbeinu. By the time we arrived, we had shed enough impurity to enable us to receive the Torah. We had “cracked the shell” of our physical and spiritual enslavement. On Shavuos we broke out!

This is the two-part process of our birth, as exemplified by the egg.

It is vital to understand that cracking the egg – the avoda of Sefira – is in itself intense labor. The little bird works hard to crack that shell from the inside and that is an indication to us that we must work hard to free ourselves from the mentality which binds us to the “Egyptian” lifestyle, the attachment to emptiness which almost doomed our ancestors to eternal slavery. During Sefira, our goal is to build ourselves up, step by step, until we are ready to become servants of the Ribono shel Olam and live by His Torah.

That is the moshul I heard from Rabbi Jaeger.

It occurred to me that we can add to the moshul. After Shavuos has passed and we have accepted the Torah, is the process finished?

Our spiritual growth now enters a new phase. The little bird has emerged from its shell. It is furry and cute, but it cannot fly! Its stubby wings are weak and untrained. It may fall from the nest. Its mother teaches it to use its wings. Finally, it is ready. Off it goes, tentatively at first, then stronger. Soon it is soaring upward on the wind. Seemingly, it can reach the heavens!

On Shavuos, we emerge from our shell. We have wings of Torah, but we don’t know how to use them. As we grow spiritually, we will find that we can soar above the world. If we are going to live as Hashem intended, then we are going to have to use those wings of Torah to soar upward toward the heavens, above the traps and troubles which beset those who cannot fly above this world.

This is made clear in the “Bris ha basarim,” when Hashem took our Father Avram “outside.” Rashi tells us that Hashem was taking Avram and his descendants outside the confines of the physical world to a spiritual level on which others could not soar. “Hashem took [Avram] out of the space of the world and raised him above the stars.” (Rashi on Beraishis 15:5) Torah lifts us into the world of Eternity.

This is our avoda during Sefira: to emerge from the shell of attachment to physicality and soar into the heavens: to allow Hashem, through His Torah, to remove us from darkness and the shadow of death. This is time of year when we can escape from the tumah which surrounds us, so that we can lead the world back to the state of purity in which Hashem created it.