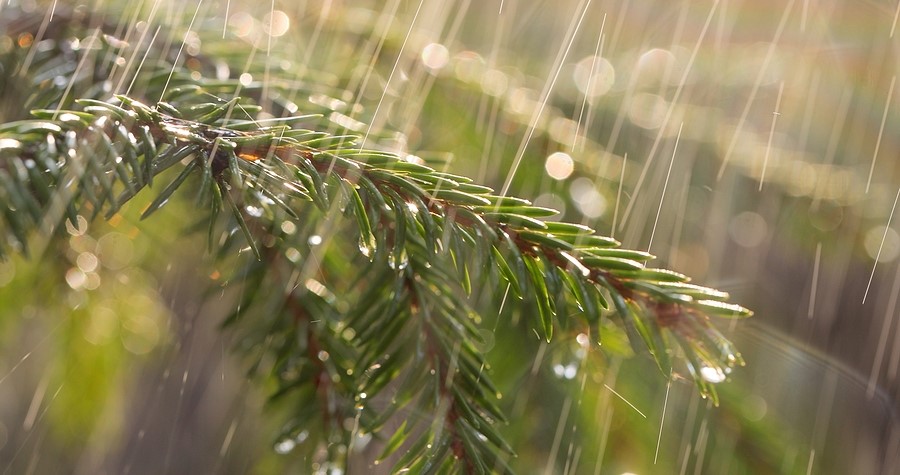 Hashem says, “I will provide grass in your field for your cattle and you will eat and be satisfied.” And then He says, “Beware lest your heart be seduced and you turn astray and serve gods of others and bow to them. Then the wrath of Hashem will blaze against you. He will restrain the heaven so there will be no rain ….” (Shema)

The Torah relates rainfall to our deeds.

In every country in the world – except one -- rain falls as a matter of course. The clearest example is Egypt, where regular Nile flooding is responsible for the fertility of the land. The Torah tells us explicitly: “The land [of Israel] … is not like the land of Egypt … where you would plant your seed and water it by foot like a vegetable garden.” (Dvarim 11:10) Rashi explains that, in Egypt, they would carry water by foot from the Nile, which was a steady, dependable source of water. In other countries also, rain falls in its predictable course, either much or little. But not in Israel.

Only in Israel is the rain dependent upon moral as opposed to physical factors. The Torah is totally explicit on this, as we saw above: If, G-d forbid, we “turn astray and serve gods of others and bow to them …. [Hashem] will restrain the heaven so there will be no rain.”

The Gemora says, “Let us say that the Jewish People were completely wicked on Rosh Hashanah and it was decided [in Heaven] that they would receive little rain [that year].” (Rosh Hashanah 17b) Everything depends on our moral condition.

“The character of the year … is solely dependent on [our] moral behavior…. G-d’s solicitude for the world of mankind is concentrated in His care of this land…. Every drop of rain on earth that falls for the sake of Tzion falls for the sake of the whole future of mankind which is guaranteed by Tzion ….” (Rabbi Samson Raphael Hirsch on Dvarim 11:12)

Not only does our moral behavior directly influence rainfall in the Holy Land, but it affects the entire course of world history. The welfare of the entire world is a direct result of the moral condition of the Jewish People!

My friends, this year there has been basically no rain in the land of Israel, perhaps a few drops at most. We begin the general prayer for rain during Sukkos. I mentioned last week that we received rain on the actual day the prayers began, but that was only a taste. Since then, the sky has been clear and the land almost dry.

Hashem, it seems, is not happy with our behavior. What are we doing wrong?

Immediately following the words “You will eat and be satisfied,” are the words, “Beware lest your heart be seduced and you turn astray and serve gods of others and bow to them. Then the wrath of Hashem will blaze against you. He will restrain the heaven so there will be no rain ….” Evidently, we are in danger when we “eat” and are “satisfied.” When material satisfaction is our prime concern, we get into trouble, big trouble.

It happens that the Daf Yomi cycle is now studying Maseches Taanis, which discusses the fasts undertaken because of lack of rain. And why do we lack rain? “Rabbi Tanchum bar Chanilai said: rain does not fall unless the sins of Israel have been forgiven.” (Taanis 7b) Evidently lack of rain is related to sins committed by the Nation of Israel.

Is it not remarkable that Daf Yomi reinforces this message?

There are no accidents.

We have to tremble.

In this week’s Parsha, Yaakov Avinu fights with the Angel of Esav. This is the perpetual fight of the Jew – throughout the long night of our Exile – with the world of materialism, the world of Esav. If we lose this fight, we are finished, G-d forbid. If we maintain our character as “Yisroel,” we will survive as the Holy Nation.

Hashem, Master of the Universe, stands behind the physical world. That world does not exist as an independent entity, but only by His command; it operates only through His continued providence. There is no world without His will.

We are allowed to use His world only if we follow His rules. If we do not say a bracha before eating, then we are stealing the food! And if we fall into the trap of worshipping the material world and not the Creator, if we think that “my strength and the might of my hand made me all this wealth.” (Dvarim 8:17), then we will – G-d forbid – become victims, as it says, “I testify to you today that you will surely perish.” (ibid 819)

My friends, this is serious. The Jewish People and the State of Israel cannot survive if we worship ourselves the way Pharaoh did. Then we will open ourselves to the greatest dangers, G-d forbid, like those terrible catastrophes which have befallen us over the centuries. This is not theory; we have seen these tragedies with our own eyes.

When will we grow up?

How much must we endure until we submit to the Rulership of the King of the Universe?

Geshem … rain is compared to T’chias Hamaisim, Resurrection of the Dead. Right now, we are acting like dead people. Dead people -- those who fight with Hashem -- do not think.

“Wake up! Wake up! For your light has come! Rise up and shine!” (Lecha Dodi)

When we wake up and return to Hashem, then blessed rain will fall upon the Holy Land!

GLOSSARY
Daf Yomi: The worldwide study of one page of Gemora each day, through which the entire Gemora is completed (approximately) every seven years.