The World of Torn Dungarees 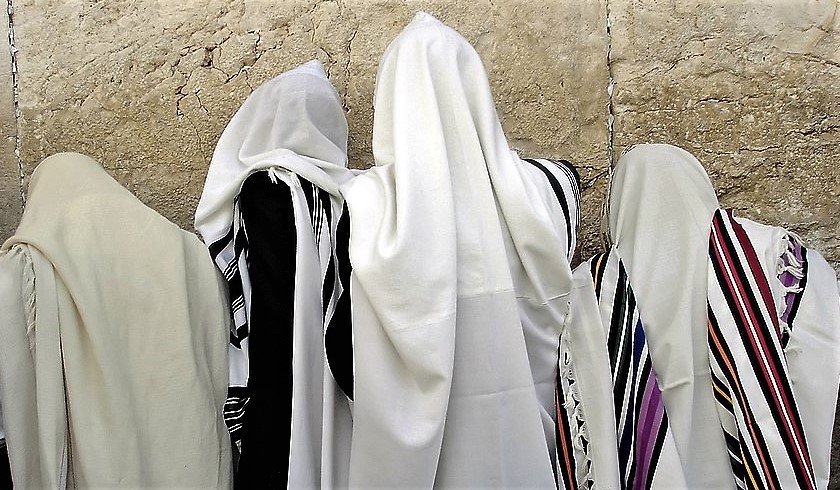 My friend, Rabbi Reuven Cohen Shlita”h, is a distinguished Rosh Kollel in Kiryat Sefer. He is also a kohain who is an expert on the laws of korbanos and the avoda of the Bais Hamikdosh. He goes each week to theKotel, the Western Wall, and he is crying. He should be inside the Bais Hamikdosh performing the avoda … but he is outside.

We are all outside.

Swarming around the Kotel are our enemies, who taunt us and say that the world of purity will never return. I personally have a very difficult time davening at the Kotel. My awareness of my own weaknes become powerful there and I am disturbed by the forces of impurity that are attracted to this holy place.

There are holy Jews who say Tikkun Chatzos every midnight, sitting on the floor and weeping over the Bais Hamikdosh. Indeed, we can never cry enough. It is midnight in our souls, a time of darkness.

This week’s Parsha is about an ideal world – in fact, this is the real world – which we are striving now to rebuild. We live in the world of torn dungarees, but there is a world of dignity, where clothing reflects majesty.

“All who mourn [the destruction of] Jerusalem will merit to see it in its joy.” (Ta'anis 30b) It behooves us to mourn. We should be constantly feeling the inadequacy of the present situation. Nothing can be right until we have the Bais Hamikdosh back. We need a different kind of world, and the world of the Bais Hamikdoshis not the same world we are living in.

This week’s Parsha describes the garments of the holy Jews who walk in dignity, constantly performing the will of the Ribono shel Olam in the holiest place on earth. The parsha ends with the description of the Golden Altar upon which the ketores, the incense, is brought.

Let’s think about the ketores. Smell is the innocent among the senses.  It is relatively pure, relatively unsullied by sin.  Even today, there are fewer objectionable influences aimed at the sense of smell than at other organs of sense. (These thoughts on the ketores are taken from my book, “Worldstorm: Finding Meaning and Direction Amidst Today’s World Crisis.”)

G-d breathed the soul into us through our nostrils. (Beraishis 2:7) As we say every morning, “My G-d, the soul You placed within me is pure.  You created it, You fashioned it, You breathed it into me.…” That is why, when we are saddened by the departure of our “extra soul” after Shabbos, we smell pungent spices to revive us.  The same passage through which the soul originally entered, the same passage through which our extra soul departed after Shabbos, through that same passage we are revived by the spices. The sense of smell is our link to the Garden of Eden. When our Father Abraham entered the Cave of Machpela, he inhaled the aroma of Gan Eden emanating from there.

“Among all the sacrifices that were offered in the Holy Temple, none was as precious before G-d as the incense…. The incense … was an enlightened remedy to purify people from sin.  Whoever smelled the fragrance of the incense … would have thoughts of repentance.  His heart would be purified of all evil thoughts and from the defilement of the Evil Inclination…. The incense had the power to break and subjugate the power of the Evil Inclination…. In the time of plague there is no remedy better than the ketores. This was a gift that the Angel of Death gave Moses when he went on High to receive the Torah.” (Yalkut Meam Loez) Rashi says, “Incense is the dearest of all the offerings.” (Bamidbar 16:6)

Reb Reuven’s heart is breaking, because he sees the Bais Hamikdosh in its destruction, a world without purity, without dignity.

Let’s look into this week’s Parsha and think about the perfect purity and beauty with which Hashem designed the world. Just before Shabbos, when we put on our special clothes, we feel elevated just by the royal clothing, the shined shoes. Perhaps we just immersed ourselves in the mikveh. We are spiritually and physically clean. We are elevated. We are preparing ourselves to receive the Shabbos Bride.

Can you imagine how elevated the world will be when the kohanim are once again walking in their garments of dignity in the Bais Hamikdosh? Every detail of their clothing, its measurements, its materials, is specified and exact. Wearing this clothing transforms the earth into a heavenly place.

I am reminded of the writings of Rabbi Chaim Volozhin zt”l: “The unquestionable truth is that if there was even a moment when from one end of the world to the other there was not a word of Torah being studied or contemplated, all the worlds, in the upper and lower spheres, would be destroyed and the universe would dissolve to nothingness, G-d forbid.” (Nefesh Hachaim 4:11)

The converse is also true: there will come a day when the words of the Prophet will be fulfilled, and “The earth [will be] filled with the knowledge of Hashem as water covers the sea bed.” (Yeshiah 11:9)